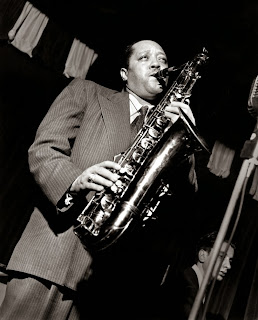 
Lester Willis Young was born in 1909 in Woodville, Mississippi but the family moved to New Orleans before settling in Minneapolis. Lester grew up in a musical family and his father taught all his children to play instruments. By his early teens Lester could play trumpet, saxophone, violin, and the drums. The family band appeared regularly on vaudeville and carnival circuits until Lester left in 1927. He objected to the tour of the Southern United States, where segregated (de jure segregation) audiences in public places were enacted through the Jim Crow Laws (1876-1965). Lester began playing tenor sax with Art Bronson's Bostonians. After reuniting briefly with his family he resettled in Minneapolis and played at the Nest Club in 1931. In 1933 he moved to Kansas City which was a hot bed of jazz and joined a succession of bands, and playing with many notables including: Bennie Moten, George E. Lee, Clarence Love, King Oliver, Fletcher Henderson Orchestra, and Coleman Hawkins. In 1934 Lester joined the Count Basie band where he played tenor sax in a very relaxed style and gained considerable public following.


His style contrasted sharply to the aggressive approach favoured by Coleman Hawkins, the dominant tenor player of the day. As a saxophonist Lester’s style was not always popular but was much admired and copied by other musicians. When Coleman Hawkins left the Fletcher Henderson's orchestra, Lester was invited to take his place and remained there for a short time. He preferred his own style of play and refused to mimic Hawkins so he soon joined the Andy Kirk band and played with them for six months before eventually returning to Count Basie in 1936.


Now playing clarinet he featured regularly on recordings from 1938 until 39, when his clarinet was stolen. Lester was quite a character and created his own hip language. He was a flash dresser and always wore a trademark pork pie hat. On stage he would hold his saxophone like a flute which was a practical measure not to bump into other musicians on a crowded stage. However, he occasionally would play in this manner long after and Billie Holiday dubbed him the Prez (as in President of Jazz). Young left the Basie band in late 1940 and led a number of small groups many of which featured his brother, Lee Young on drums. Throughout this period he made some memorable recordings with Billie Holiday and Nat King Cole.


Fletcher returned again to the Count Basie band in 1943 and there he stayed until his call up in 1944. Unlike most white musicians who joined musical cores Lester served in the regular army and was subjected to racist mistreatment before finally being court-martialed on drugs charges. He served one year in a detention barracks and was dishonorably discharged in late 1945. His experience in the detention barracks inspired his composition "D.B. Blues" (with D.B. standing for detention barracks) but post 1945, Fletcher’s style had changed and his music had a distinct darker side.


While the quality and consistency of his playing gradually ebbed in the latter half of the 1940s and into the early 1950s, he continued to give some brilliant performances. Lester joined Norman Granz's Jazz at the Philharmonic (JATP) troupe in 1946 and toured and recorded regularly with them for the next 12 years.


His creative playing declined as he continued to drink heavily and began to rely increasingly on a small number of clichéd phrases which was a criticism he often leveled at ‘repeater pencil’ musicians who continued with tried and tested formats. Lester Young’s playing and health reached a low ebb in 1955 when he suffered a nervous breakdown and was hospitalised. He managed to make a comeback and went back to recording and performing including a tour of Europe with Miles Davis and the Modern Jazz Quartet.


Lester Young occasionally sat in on Count Basie Orchestra gigs and performed at the Newport Jazz Festival in 1957. By now the Prez was suffering from liver disease and malnutrition but carried on drinking heavily. By the time he returned from an unsuccessful gig in Paris in 1959 he was a very sick man and died a year later, aged 49. Lester “Prez” Young was one of the finest, most influential tenor saxophone players who played with a cool tone and sophisticated harmonies. At his peak his solos were brilliant and considered by many jazz musicians an unparalleled marvel of economy, phrasing and extraordinarily moving emotion. Young's playing style influenced many other tenor saxophonists including: Charlie Bird, Stan Getz, Dexter Gordon, Zoot Sims, Don Byron, Al Cohn, Gerry Mulligan, Sonny Stitt and Paul Quinichette among many others.